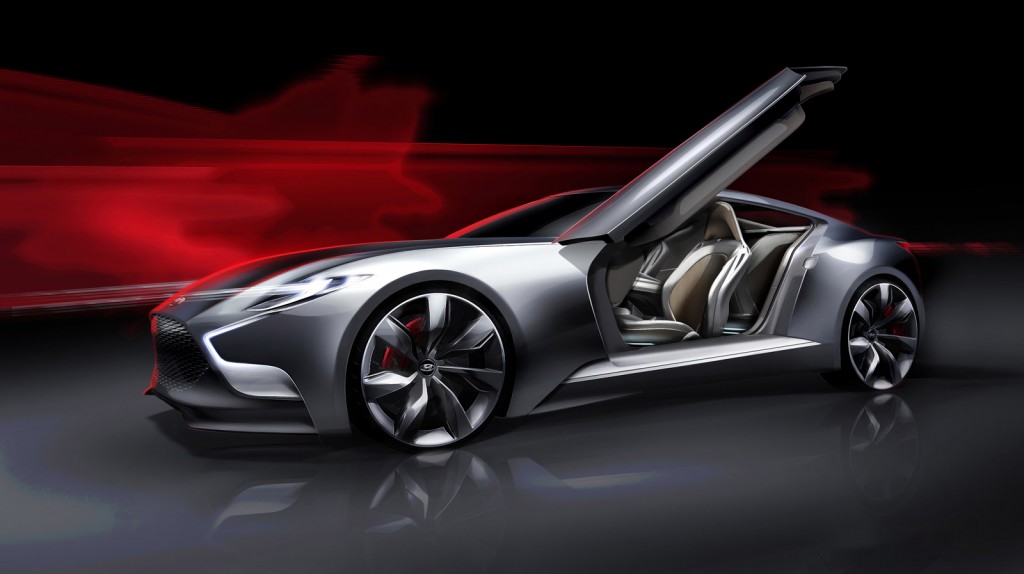 Hyundai decided to give preference to native platform for the premiere of the new concept coupe HND-9, which will be presented at the motor show in Seoul. At the same time, in NY will be another high-profile auto show. The main thing is that the new Hyundai concept could hint at the next generation of Genesis Coupe.

The design is quite understandable philosophy of “Liquid Sculpture“. Aggressiveness and agility manufactures tried to express by a long bonnet and a large hexagonal grille. In Hyundai say, that HND-9 is “rethinking of elegantly classic coupe.” It is a pity that the doors of “butterfly wing” will not reach production.

It is known that Hyundai HND-9 Concept is equipped with a six-cylinder petrol engine of 3.3 liters with direct fuel injection and turbo. Maximum power is 370 hp torque to the rear wheels through an eight-rate automatic box.

Exterior of Hyundai HND-9 can be characterized by a single, but very close word – “aggressive.”

It was promised that as we approach the date of the premiere at the Seoul Motor Show, we will have more information. While presenting their HND-9 in Korea, Hyundai will show a new version of premium sedan Equus in New York. First photos of Hyundai Equus were made public by mid-March.