Japanese are surprisingly stingy on details, offering to glimpse on their New York auto show and see a new generation of seven-seat SUV Toyota Highlander.

New generation Toyota Highlander crossover will debut at the Auto Show in New York this year, but for now, the Japanese company only indulged public image of lights and “slice” of the grille.

Well, what can be said – thanks for this, guys! Let’s try to see some details and imagine this novelty.

On the first teaser, which is available online now, we can only say that the car will get more militant and serious “face”, than the current generation auto. While nothing definitive can be said about technique, but, presumably, the model will keep a close relationship with the sedan Camry. 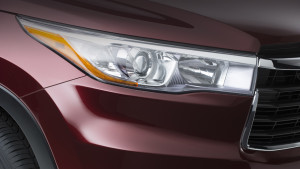 In addition, the company announced appearance of a new sport coupe Scion tC in New York. But with its teaser situation is even more severe. Straining the eyes, we can only assume that the new coupe apparently will not become as angular as the current version.

Highlander in its current form is available since 2010. During this time the car has found several versions, including a hybrid. As an experiment, Highlander was released even on fuel cells.