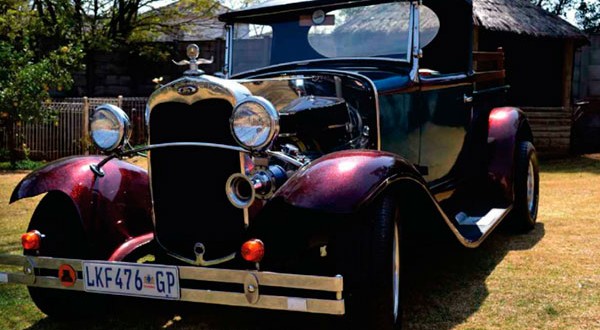 Back in Time: Ford Pick-up

Where were you in 1969? What were your dreams? If you wanted to have horsepower in those days, you were spoiled for choice. If you wanted Chevrolet you could get a Camaro, a Chevelle, a Corvette, Nova or even an El Camino. Plymouth had the Barracuda, GTX or Roadrun-ner, Pontiac the GTO and Ford had the Mustang. But if your name is Ben Vorster you build your own homebuilt Hot Rod. The car of choice for him was the 1930 Ford Roadster Pick-up and looking at it you can feel the 60’s just oozing out of every pore.

This might be the oldest surviving unmolested Hot Rod in South Africa sporting a red and blue custom metal flake paint scheme. This little Rod was started in 1969 and first saw the light of day in 1974. The standard Pick-up was bought by a piston ring member as a parts mule for his own car that was kept standard, she was complete but all the detailing parts were stripped when Ben first saw her. The bare shell called out to him to get her down the road again and he complied by making his dream car a reality. It wasn’t just a chance encounter as Ben’s wife bought him a model of a 1930 Roadster Pick-up as a gift and the car crept into his heart as he fitted the small plastic parts together. When the 1/24 scale model was completed he showed it to her and matter of factly said now for a bit bigger scale. We don’t know if she believed him but 40 years on and the proof is still parked in his garage. 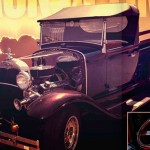 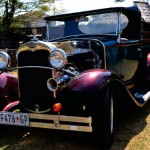 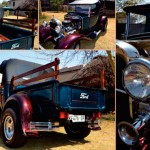 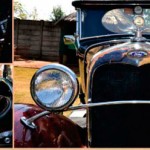 So how did they build Hot Rods in the good of days? You start by boxing the original chassis and then you get a 327 Chevy V8 from a 1966 Chevrolet Impala just lying around at Tarlton. Today a car like that would be a prize find to restore but those days it was just an easy source of parts. The next part of the story might leave some Classic car fans with nightmares. Ben heard about a 1955 Chevy Belair that had some minor damage after a traffic accident, he bought the car and cut it up to get the rear diff and running train, the rest was scrapped. The original front suspension was dropped 4я but the rear was left as is. Stopping power was never a highlight in the ‘30 Pickup but with the new engine and some vigorous driving, it would never be enough. A Volvo B20 donated its stopping power to the cause and it was all kept on the road with 14″ rims sourced by Tiger wheels from a Johannesburg builder called Jimmy Janelle. The 327 was fitted and breathes easy with the help of a Holley 600cfm carburettor and a custom stainless steel exhaust system safely expelled the used gasses out the back. The power is transferred to the rear wheels via a turbo 350 auto gearbox.

The body was massaged back into shape by Ben himself and after countless hours with a dolly and hammer the body was ready for a paint job like only the late 60’s can provide. Dark red and blue paint was applied by his brother-in-law who also went overboard with the metal flake. This car glitters like a diamond in the sunlight and will definitely not be missed by other drivers. The bed was re-done in true South African style with railway sleepers cut down and planed to fit. In my opinion, a much better use for them rather than another homebuilt bar. The bed posts were handmade with Me-ranti wood and varnished to a luster. In front the hood was removed and after-market head lights were fitted. The only other body modification was the removal of the spare wheel and some period engraving on the front windscreen.

The interior is sparse to say the least with a red and black leather bench seat and door panels which are set off by a red carpet and wood rim steering wheel. On the floor the shortest gearlever ever seen is topped by a grinning skull knob, daring you to put this time capsule into drive and head on down the road to a drive-in theatre for an unforgettable evening. Drag racing and car shows? According to Ben she’s made to drive and was never meant to be a racecar or a trailer queen, I can’t agree more.

What’s next for this old school survivor you may ask, somewhat sadly Ben tells me he plans on tearing her down and doing a complete re-build. When I asked him why, all he said was she drives like a truck, an 80 year old truck so maybe it is a good idea, as long as it’s unique and looking at his pride and joy, I’ve got a suspicion it will be.