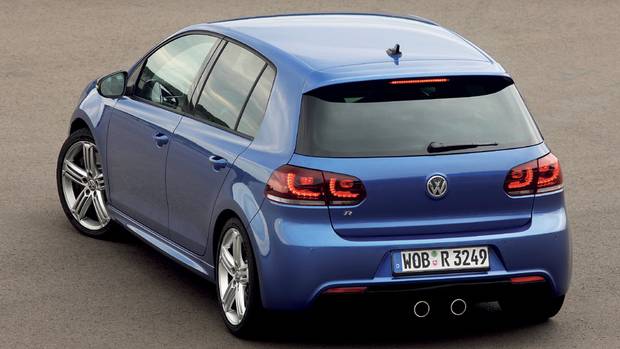 Volkswagen Company has informed the new generation Volkswagen Golf R will be at least 20 liters more powerful than its predecessor (265 hp).

The manufacturers of Volkswagen Golf R decided to create a novelty very similar to the Audi S3 on characteristics, but twice cheaper its predecessor. According to preliminary data, in the UK the seventh Golf R will cost 35 thousand euros.

Under the hood of the most powerful Golf accommodates 2-liter “turbo-four“. The car will receive four-wheel drive transmission, but compared to the previous model 4WD the system will be simplified. The sixth Golf R was 150 pounds heavier GTI. Now, manufacturers are going to reduce this difference to 100kg.

British journalists believe that the Golf R will get a limited-slip-slip differential, which optionally available for GTI. It optimizes torque distribution and eliminates understeer. The driver can completely disable ESP system.

Official debut of Golf R is planning for the fall of this year at the Frankfurt Motor Show. We remind you that according to some reports, the price of the new car in the UK will start from 30,000 pounds.

Seventh generation “Golf” GTI debuted at the Geneva Motor Show this spring. The two-liter turbocharged engine of the car got two options: 220 and 230 horsepower.