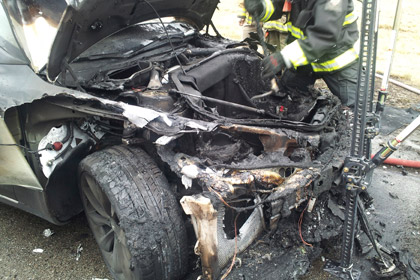 The fire destroyed a third Tesla Model S per month

Last fire occurred on the highway in Tennessee November 6, according to Reuters.

Fire, according to police, occurred when the electric ran over a piece of the tow bar (traction device for the trailer). Metallic object, as specified, struck the lower part of the engine compartment, which “led to the fire of electrical components.”

As a result of the accident no one was injured – the driver was able to pull over the highway and off the car. Judging from the published HR, Front Model S burnt completely.

Representatives Tesla, in turn, stressed that talk about ignition battery prematurely. Fire, as we are reminded in the company, was not spontaneous, but was the result of collision with a foreign object. Despite the fact that the causes of the fire have not been established, the shares fell manufacturer of electric vehicles by nine percent at auction on Thursday.

Developments in Tennessee was the third such incident this month. The first fire occurred on October 1 in Washington State and after getting into the engine compartment metal object, which struck a protective plate and caused a fire battery. Then in Mexico Tesla Model S is lit after a collision with a concrete wall and a tree.

The five-door “hatchback” Tesla Model S is made from 2012 and comes with one of two types of lithium-ion batteries: capacity of 60 or 85 kilowatt-hours. In 2013, the car has received top marks in all tests of the American crash test NCAP.