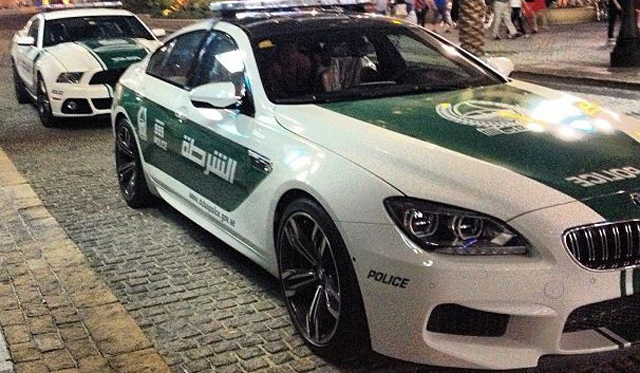 The Dubai police is armed with BMW M6 and Mustang GT

We have already reported that Dubai police has at their disposal such expensive brand models, as the rare Aston Martin One-77, all-wheel drive Ferrari FF, masthead Lamborghini Aventador, luxurious Bentley Continental GT, «charged» Mercedes SLS AMG and the famous supercar Bugatti Veyron. Today it was announced about new arrivals at the “luxurious” list of Arab metropolis police vehicles.

According to Autoevolution, few days ago, the local police has adopted arrived BMW M6 and Ford Mustang GT. The first (BMW M6) has 4.4-liter V8 rated at 560 hp. under the hood. Not Veyron, of course, but to get away from that, in the city, will be difficult. Mustang, who arrived in the UAE is equipped with 5-liter V8.

In addition, during the few months, metropolis police ride Chevrolet Camaro. Apparently, the government of Dubai decided to make a police car park the next landmark of the city, that will attract tourists. And telling the truth, it may work. As Dubai has already become the most visited city in the world, according to annual tourist guide magazine! After such experiments with police cars, there are no doubts, that the city will hold its status for a long time. So, if you are a racing fan, check Dubai car park by yourself.

2013-06-06
John
Previous: BMW releases a special edition of 7 series sedan in Japan
Next: United States has started production of the main trend of this year from Cadillac