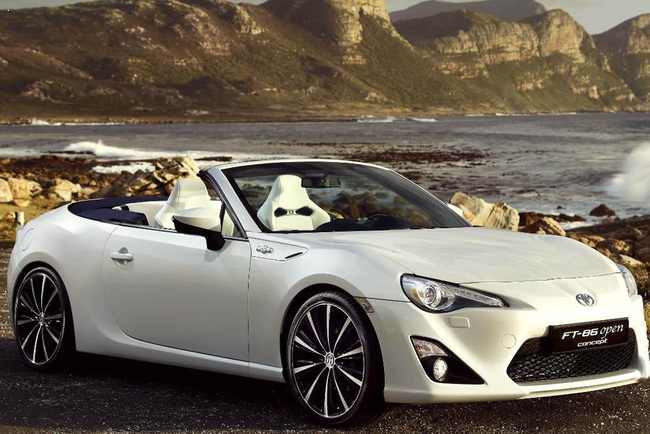 At the Geneva Motor Show, which will open in a few days, will be the world premiere of the open version of the rear-wheel Toyota GT86.

True, the model is only a concept and is called Toyota FT-86 Open Concept. When will be launched the production version of cabriolet is still unclear.

Open Concept got a soft folding roof and a four-seat interior. So, as expected journalists and auto fans, GT86 will be cabriolet, not a roadster. While on rear seats, judging by the photos, even children will not be able to sit comfortably. Body of the prototype is painted white, and the interior is made in a contrasting design.

Public modification of Toyota GT 86 will be equipped with a standard atmospheric petrol engine to two liters, whose power is 200 hp. The car will be available with either manual or automatic transmission.

Japanese keep silence about the power unit of the car, but there are no doubts, that cabriolet will get the same 2-liter “boxer”, as the coupe. Unit capacity – 200 liters. Coupe with such engine accelerates to a hundred in 7.6 seconds.

Presumably the price of Toyota GT 86 will be about $ 2000 more than the same name coupe. Following the public version of Toyota RWD model BRZ, Subaru company is planning to manufacture the twin of GT 86.