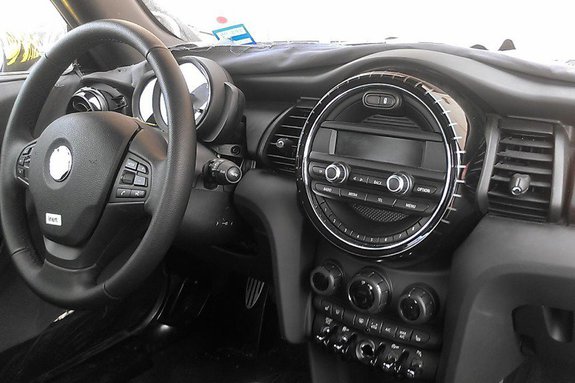 A lot of people hoped that new generation Mini Cooper hatchback presentation will take place within the motor show in Geneva. However, the British did not bring a car in Switzerland, and it looks like we will not see it before September Frankfurt Motor Show. In the meantime, we can enjoy spy shots of fans. This time, the paparazzi managed to capture fancy interior of the new car.

Remind you that earlier it was difficult to make any photo of Mini Cooper on February presentation, as representatives strictly monitored visitors of the show and took cameras and cells at entrance.

Stylistically, the interior will not change much. However, the speedometer will leave its place, and instead of it will be equipped round multimedia system. Thus, espionage pictures show hatchback Mini Cooper in the basic version, and the top model will have big screen on the central console.

Also new hatchback will be equipped with full LED headlights. Plus, the new “Cooper” will have an interesting feature, providing lights into the cabin during a phone call on a driver cell. It is possible that the next-generation model also will get a rear-view camera and auto-parking.

The release of new Mini Cooper model in mass sale is scheduled for March next year.

2013-04-06
John
Previous: Demand for Tesla Model S electric car has overtaken forecast
Next: Ford Mustang from “Gone in Sixty Seconds” will be sold at auction in May 18