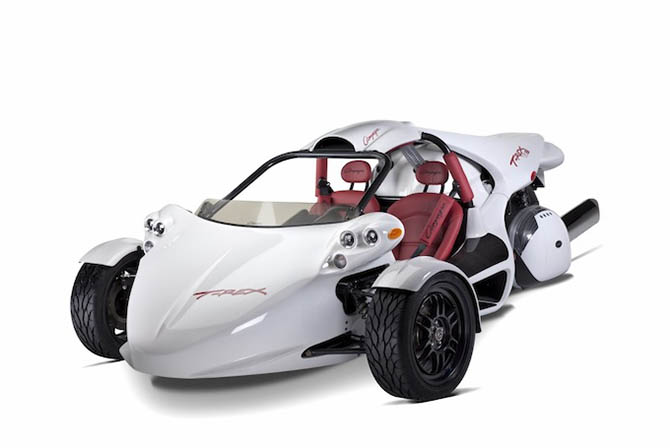 Canadian company Campagna Motors, developing three-wheeled vehicles, is ready to launch a new model into production. The model name is T-Rex 16S and it will work on BMW motorcycle engine.

By the way, T-Rex 14RR broke all records in the world on its wide. And in fact, this is the most significant change of novelty, compared to its predecessor – V13R. In this model, Campagna decided not to use the V-Twin Revolution of Harley-Davidson, replacing it with a 1352 DOHC-unit Kawasaki. Power of the new engine is 197, enough to propel T-Rex 14RR to hundred in 3.9 seconds and gain a top speed of 230 km / h (I hope you will resist the test of the speed!). The official website of the manufacturer offers two options of tricycles T-Rex 14R (price $ 52,000) and the T-Rex 14RR (price $ 56,500). Such a large difference in price ($ 4500) is due to the fact that the second model is wider and has a lower center of gravity, as well as different coloring of the body.

What price will be the new T-REX 16S model has not been announced yet. We only know that the power of the 1.6-liter engine for the T-REX 16S is 160 hp of torque 175 Nm. The engine is paired with a six-speed sequential gearbox.

Agree, the car is for true connoisseurs of speed and originality!

2013-03-20
John
Previous: Americans reduce the number of off-roaders with 8-cylinder engines
Next: Two legendary Ford models in one: interesting experiment