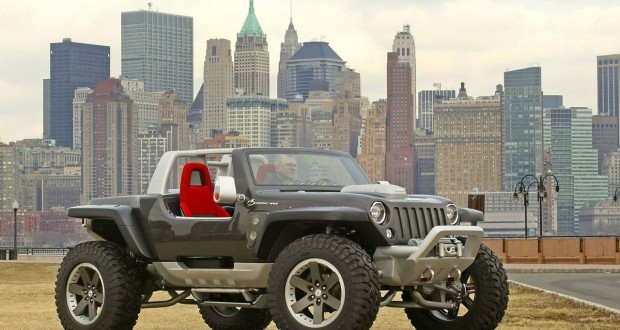 The Jeep Hurricane concept vehicle sounded impressive when they started up both of its HEMI engines as it stood behind the curtain at the 2005 NAIAS in Detroit. Jeep fans should be happy with this one, because it appears to be a vehicle that will go anywhere, anytime, and the name’s a natural, because Chrysler’s “turntable feature” lets this Jeep spin around in place like a top.

Hurrican’es HEMI Engines
One of the Hurricane’s engines is in front, and the other is in the rear, facing opposite of each other. Each 5.7-liter engine delivers 335 hp and 370 lb-ft of torque, or a total of 670 hp and 740 lb-ft torque.

The Hurricane can run on four, eight, twelve or sixteen cylinders, tweaking power for the driving task ahead. Meed a quick getaway? Hurrican can go from 0-60 mph in less than five seconds.

Skid steer capability and toe steer give drivers the ability to turn both front and rear tires inward, allowing the vehicle to turn in a circle where it sits.

Hurricane is equipped with two modes of four-wheel steering. The first, traditional mode, rotates rear times in the opposite direction of the front tires to reduce the turning circle. The second mode allows the driver to turn all four wheels in the same direction for crab steering, which lets the vehicle move sideways without changing the direction it is pointing.

The Hurricane’s one-piece body is shaped from structural carbon fiber, and its suspension and powertrain are mounted directly to the body. An aluminum spine runs under the body to connect components and to function as a skid plate system.

Although its lightweight, Hurricane’s strength is notable. Appearance includes Jeep’s signature seven-slot grille, two seats, but no doors. Once inside, occupants are surrounded by exposed carbon fiber and polished aluminum. 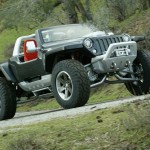 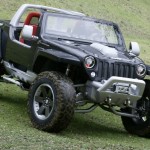 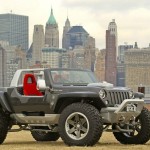 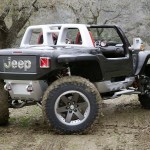 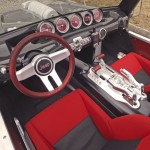 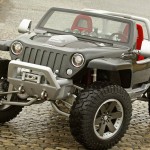