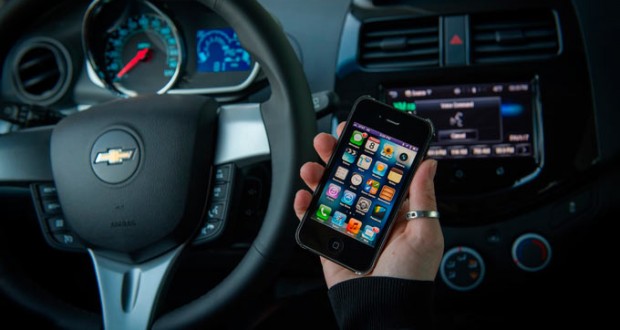 Apple announced its plans to bring iOS to your car back in June, and we’re finally getting a peek at what that might look like in action. While we’re still waiting on vehicles that actually support Apple’s iOS in the Car integration to see how it truly works, developer Steven Troughton-Smith was able to look at an early version of it by emulating a car’s display from his Mac, using code from iOS 7.0.3.

In a video, Troughton-Smith demonstrates how Apple Maps looks under the recent version of iOS’ in-car integration. The actual map takes up the car’s entire display in most cases, with translucent control panels partially masking its top and bottom. On top are touchscreen shortcuts to search for a location, browse bookmarks, visit recent destinations, and look up information about your location and nearby traffic.

Searching for locations in the car appears to be done by voice, though Troughton-Smith shows that locations can be sent from an iPhone over to the car’s display as well. Curiously enough, the iPhone’s home button even makes an appearance in the car, where — like on the iPhone — it’s used to navigate from a given app back to a main screen. Though Apple demonstrated back in June that iOS in the Car would have apps for music, messaging, and placing calls, only Maps and a basic music player appear in Troughton-Smith’s emulation.

Since iOS 7’s announcement, Apple has labeled iOS in the Car as a feature that’s “coming soon.” Part of the holdup is certainly the absence of vehicles that support the feature, but Troughton-Smith’s demonstration suggests that the feature’s complete code may still be absent from iOS too.

That could be changing though: on Twitter, Denis Stas managed to pull up iOS in the Car as it appears in a beta of iOS 7.1, and it looks quite a bit different. While Troughton-Smith’s video shows Apple Maps in the car appearing in iOS 6’s style — despite running off code included in iOS 7 — Stas’ image of Maps features iOS 7’s new design. With Apple apparently preparing to ship an updated version of iOS in the Car, it may not be long until Apple gives us a look at what it’s like to use from the driver’s seat. (c) Theverge 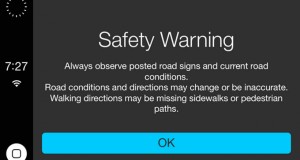