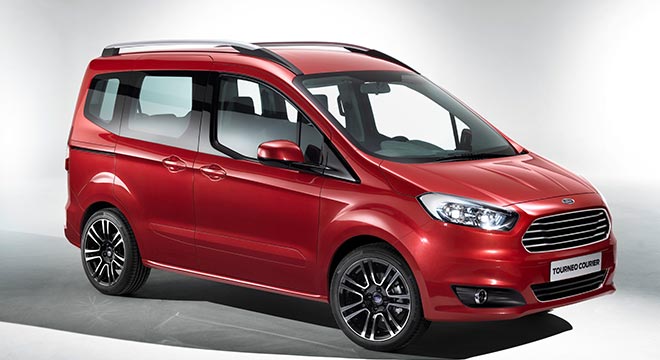 One of the first Geneva Motor Show premieres was the presentation of two new products from automaker Ford – family minivan Tourneo Courier and its seven-seat version of the Grand Courier.

Tourneo Courier is based on the global “Ford” B platform, which is also used in the Fiesta and B-Max. The new model is available in five-seat and seven-seat modified version with a larger 400 mm wheelbase. Length of “five-seat” is 4450 mm, while the Grand version is up to 4820 mm.

Producers themselves describe a new minivan as a “model, suitable for a family, who need spacious and yet inexpensive car.”

Motor gamma of Courier has 1.6-liter TDCI in three capacities: 70 hp, 90 hp and 109 hp, and the 1.0-liter and 1.6-liter EcoBoost (97 and 121 hp, respectively). All engines, except the 1.6-liter EcoBoost, will be paired with a six-speed manual transmission. The latter will receive six-step “automatic” Powershift.

As for equipping new items, the creators mentioned that both versions will receive a list of equipment, which are usually installed on the passenger models of Ford, including Active Grille Shutter, reducing aerodynamic drag and emission of harmful substances into the atmosphere .

Production of Tourneo Courier will be launched in Turkey next spring.