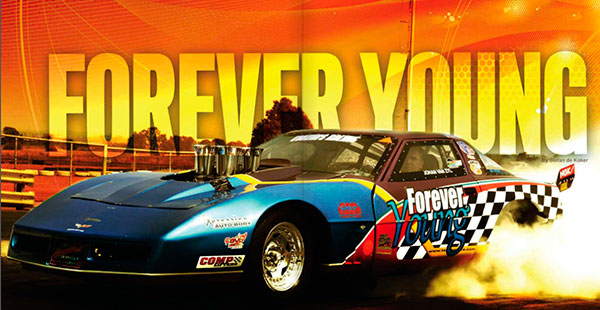 In 1984, the fourth generation Corvettes were released on an unsuspecting public and the response was, to be fair, mind blowing. Everyone wanted one and In 1984 over 51,000 cars were produced. It was the car to have and the car to be seen In, even the A team had a white one following the van everywhere. I remember my Hot Wheels C4, one of my favorite toys growing up but by 1990 the Image was waning. The only really cool C4 was the ZR1 and that was out of reach to all but the richest car nuts but something else happened that year. A standard C4 was sold that was destined to be an Icon but not In the States. A drag racer In America decided the C4 would be the perfect base to build a doorslammer with some style. She was campaigned there for a couple of years but didn’t really set the world on fire. A few years later, a South African racer called Benny van der Merwe heard about a C4 dragster for sale and Imported her to the land of braaivlels and biltong. She was raced In various paint schemes throughout the years until drag racing legend Mick van Rensburg, bought her for his personal stables in 2006. That Is where Johan van Zyl met her and from the start It was a match made In heaven.

Johan van der Unde Jr. from Xpresslon Autobody repainted her In one of the most eye catching paint schemes seen on Tartton. Yes that Is paint and not a wrap as a lot of people expect and the quality Is show car good. Under that long blue bonnet lies the heart of the beast, a 581 cu In Merlin big block Chevrolet engine featuring a Hillbom fuel Injection system, yep this baby Is normally aspirated, unbelievable as It might seem looking at the times she sets. A lot of race teams are secretive about what setups they run but not the Forever Young team.

The big block engine Is fitted with 8 Venolla pistons connected to an Ohio “4340″ Billet crankshaft with Venolla Aluminium conrods. Bearings are speed pro race bearings and on top are 2 Dart aluminium cylinder heads fitted with Manley severe duty valves controlled by a crane cams mechanical roller camshaft. Closed up the block is filled with Fuchs drag Titan SAE 50 engine oil and the compression ratio is set at 16:1. Ignition is handled by a Vertex magneto and spark is delivered with NGK sparkplugs but the really scary part of this setup comes next. The fuel pump is an Enderle mechanical fuel pump force feeding the engine its high octane diet of methanol racing fuel at a rate of 65 meters per litre which works out at 2 litres for a burnout and 6 litres for a 1/4 mile run. And you thought a Hot Rod had bad fuel consumption but ail that amounts to approximately 1000hp (746kW).

All that power gets managed by a Chevy turbo 400 3 speed auto gearbox with a trans brake (something like a launch control for really talented drivers) and a 6000 RPM stall 9.5“ TCI converter. Sending power to the Strange engineering differential out back. Stopping power is also supplied by Strange in the form of 4 pot disc brakes and getting that amount of power onto the ground is the job of a set of Hoosier 32×14-15 rear tyres and keeping it pointed in the right direction is the job of the two Mickey Thompson 26×7.5-15 front tyres. 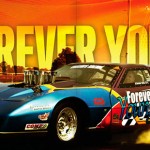 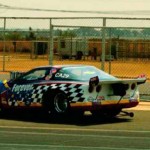 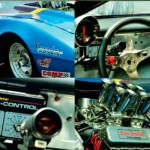 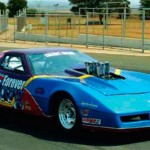 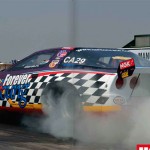