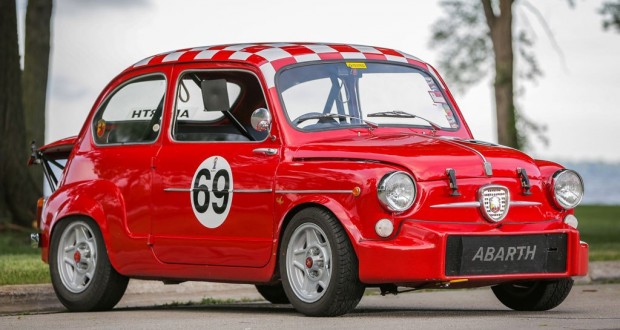 Fiat launched the “D” version of the 600 at the start of 1960, shortly after Carlo Abarth began designing the 850 Touring Competizione with grand touring competition in mind. Introduced in 1961, the Fiat Abarth 850TC was essentially a 600 sent directly to Abarth without front brakes, a crankshaft, carburettor, exhaust, or some other minor parts. Abarth fitted the cars with modified components and sold them for only a 25 per cent increase over the base price of a Fiat 600.

This was an incredible deal considering that the 850 had 52 brake horsepower, which was three and a half times more horsepower than the 600, and a top speed of 92 mph. Abarth also upgraded the brakes to discs, tightened the suspension, and supplied a sports-style steering wheel, as well as added a rev counter and an oil temperature gauge to the normal instruments. In order to obtain the homologation of the touring category, Abarth had to reach a monthly production of 150 units. This meant that it had to guarantee the minimum number envisaged, which was 1,000 units.

From the TC came the TC Nürburgring Corsa, which had an extra 16 brake horsepower and a large front-mounted radiator. Combined with the propped-open boot lid, it gave the cars their purposeful look, and the open boot not only cooled the motor, but it also acted as a rear spoiler. The ultimate version was bored out to 1,050 cubic centimetres, and it could generate 112 brake horsepower at 8,000 rpm and top 130 mph. In this form, it proved a worthy opponent for the Mini Coopers in the late 1960s.

Carlo Abarth made a deal with Fiat, which saw him receive payment for race and class wins. So, to maximise his income, he made sure that as many entries as possible were Abarth-enhanced and badged cars. Although many cars were modified at his factory, far more cars were built by dealers and mechanics from kits as after-market projects for customers.

The car on offer is a case in point, as it was built in Australia in 1985 from a 41,000-mile, right-hand drive 1962 Fiat 600D, complete with suicide doors. It was treated to a bare metal repaint in Rosso Corsa, with a black interior, and it was fitted with a full complement of Abarth factory parts. The most important elements of an Abarth are the crankshaft and camshaft, and the performance kit included a finned crankcase with larger diameter bearing supports, lightened and strengthened connecting rods, lighter pistons, a bigger carburettor, and, of course, his famous exhaust system. Badges, emblems, and grilles were a separate order from the go-fast bits, but there’s no mistaking the real thing once you are behind the wheel.

This car was bought by well-known vintage racer Peter Giddings whilst visiting Australia. He brought the mighty Fiat back to California and subsequently sold it to the present owner. It has been serviced recently by Motion Products, and it was fitted with a new wiring harness, a custom roll cage, and an external battery cut-off. The seller declares that it has not been raced by him and that it presently lacks a fuel cell, having only been driven occasionally and to events at Road America.

These Abarths were ferociously competitive in period, and the new owner can expect to have just as much fun today embarrassing much larger cars in vintage races, especially on tight and twisty circuits. 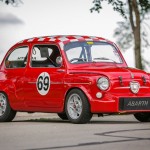 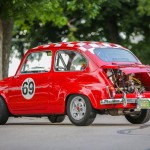 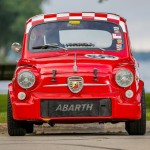 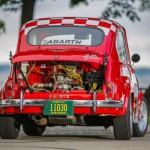 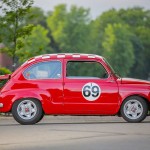 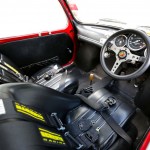