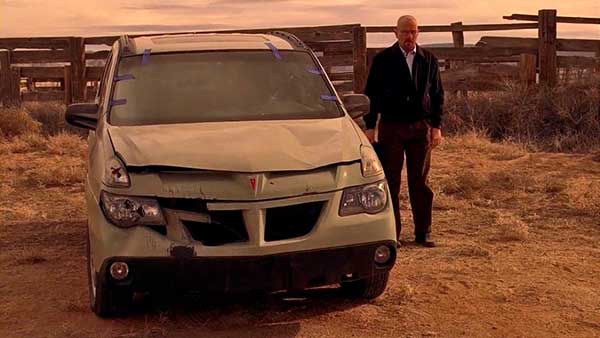 Unlike most of the currently popular TV series, “Breaking Bad” did a great job of matching characters with the types of rides they drove. The sensational television series prominently features Walter White, a chemistry teacher who becomes a drug (meth) “cook” to support his family after he discovers he has terminal cancer. As the show reaches its season 5 finale in a few day’s time, its producers are currently auctioning a number of props used in the production of the show’s five seasons. Most notable auction items are the six cars owned by the most prominent characters of “Breaking Bad” series.

Walter White’s beige Pontiac Aztek is perhaps one of the most famous Aztek in the world. It is a car that has had its share of criticism in the show including being called the ugliest car ever built. In reality, there were three Pontiac Azteks used in the production of the entire “Breaking Bad” series. The first one was used for spare parts purposes while the other one was a good versus bad memento parked at the Sony lot. The third one that is being sold was the 2003 model used in a memorable crash scene. Its rear quarter is seriously wrecked and will require some work. It is listed as a non-runner since it has not been repaired but with the buzz going around about Breaking Bad it should fetch a hefty amount.

Also on auction is the 1991 Jeep Grand Cherokee driven by Walter’s wife, Skyler, which is still in good running condition. Fans of Breaking Bad will also remember the 1983 Toyota Tercel 4WD hatchback that was driven by Walt’s junkie-assistant, Jesse Pinkman. Jesse’s Toyota Tercie is also on sale at eBay. At least a good portion of proceeds from the car’s sale will go towards a good cause – drug rehabilitation programs. However, Mike Faris Auto Wholesale who are handling its sale say that the car will not be sold until the show ends. Also on sale is the clean blue VW Beetle driven by Skyler’s shoplifting sister, Marie Schrader. Notable absentees in the auction are the RV camper van that initially served as Walt and Jesse’s meth lab and the flashy Cadillac driven by the flamboyant but unethical lawyer, Saul Goodman.

wrong tire size 2013-09-26
John
Previous: Features that your next car should have
Next: Car safety considerations in 2013