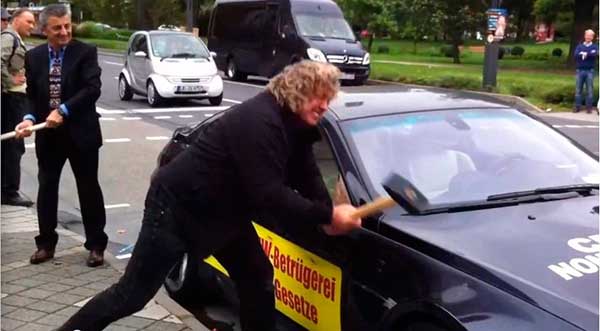 Many people these days are looking to make a statement, but few have been as dramatic as a demonstrator recently in Frankfurt.  During the course of an annual motor show in the city, he drove his BMW M6 up in front of the crowd.  He then proceeded to smash the car using an axe and a hammer.  The car itself was reportedly valued at around $160,600.  The event left many people wondering why someone would go to such lengths at this event.

The demonstration was performed by Pourmohseni Hadi, who is an Iranian businessman.  He mentioned that he had bought the car from a local dealer, but had experienced quite a few technical issues.  There were also reportedly some issues that arose when he tried to get help with the customer service through the BMW company.  All of this culminated in Mr. Hadi feeling disappointed by the lack of support he was getting after he bought his vehicle.

Most of the damage was done to the car’s exterior.  It was hit with the axe and hammer, which shattered the glass and dented the metal frame.  But Mr. Hadi states that he intends on repairing the car so he can perform this demonstration again.  He plans on bringing the car to the Bundestag, which is located in Berlin.  Some people will be interested to see how this next demonstration will unfold.

There have been a few other instances of this happening before.  It has happened a couple times in China, though the owners were protesting different things.  It is certainly a surprising way for car owners to draw a lot of attention from people in public.  Mr Hadi claims that he has many more issues to voice about the car itself.  He let reporters know that there were numerous technical issues.  It is unknown whether what kind of car he will purchase next.

2013-09-16
John
Previous: Which States Legally Allow Radar Detectors in the Car?
Next: Best Racing Games Ever for Android