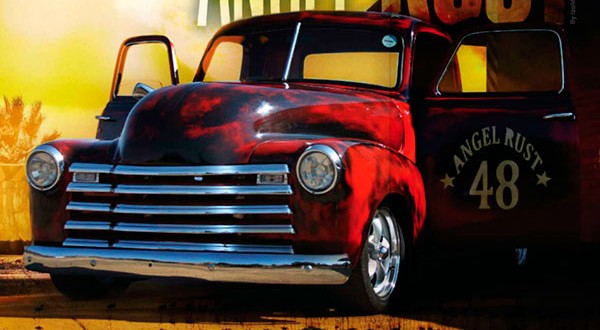 It was on March 8,2013, that my husband surprised me with the green monster, a Chevrolet Pick-up. We had been scouring the market for awhie and found someone in Durban that was looking for a LDV so a swop was arranged.

Wei, our vehicle was in running condition, the Chevy was not Although the engine and gearbox came with the Chevy with the promise that the engine had just been overhauled, we thought this would be an easy fixer-upper

My husband has a *58 Apache so I had always leaned towards a Pick-up, something that can be used every day. The silent money eater that would nearly cripple us, but that was only the beginning of the dbcoverles! It had the worst paint job that I’ve ever seen, an Interior to match and parts in a thousand pieces on the Ып; but the energy was high as I had a Chevy and she had loads of potential! I googled HI I was blue in the face as I had to make sure that my Chevy would tel her story, her way (with a bit of my personalty). Being an artist, It has always been important for me to tel a story with a project, a bit of history.

The horrid green got sanded and primed within the first week and I was lucky to get away with minor body work. The cab and Ып was Rftad off the chassis and while my husband sorted the engine, mysetf and a helper started on the body 0 did more supervising than anything else, I admit). There was a bit of work to be done on the engine compartment еересаейу the firewel as some or other sealant had been put on the panel for reasons sfil unknown. Once the engine was assembled, in true van der Merwe style, a 21 petrokjoke bottle and a pipe made its appearance and smoke belowed from a roaring engine. That was motivation and the body work carried on. To put this Chevy together was going to be something. I had seen photos taken by Evano Gucdardo of a *48 and I knew that was M Old rustic original with air ride suspension, no M*s, ready to go, and some hotee In the fender but oh, It was beautiful. 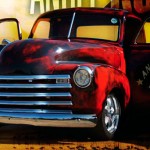 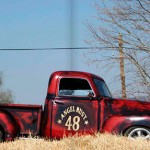 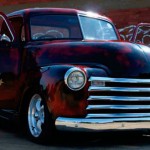 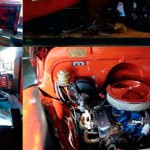 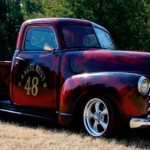 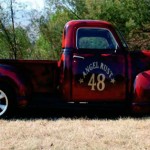 Now there was no way I had time to strip paint to the metal so I improvised. It was the biggest gamble that I would ever make artistically, with the biggest pay-off. Sorry to say but with a workshop full of men and their years of experience, my idea was laughed at. No way would this ever work. Ja reg! Ek is so hardkoppig soos n buffel! So I started a paint technique that I have not seen before and the men went quiet. My Chevy started telling her amazing story of age and survival. Enough coats of red etching primer went on to hide that horrid green, a bit of black etching here and there with a mid tone mixed and applied where needed. It looked like a disaster waiting to happen but that was the easy part.

The sanding started by hand, 600grit/ 1000grit, hard sweating manual labour! Slowly she came to life and I was ecstatic! It worked, a couple of serious knuckle blisters and we were on a roll. There was no great plan, only an idea that formed more as I worked every day with a lot of compromise as the build got momentum but the true identity is evident, that is what I wanted.

Ladies, if your husband has old scrap cars laying in the yard that make you cringe, believe him when he says “one day we will use this” Well, thank goodness for that as we had an old Jaguar XJ6 laying in the yard and a lot was salvaged off that Jag. My husband got the 350 Chevy engine going and fitted as well as a Jag suspension from the XJ6. The shocks were wire brushed to metal, clear coated and fitted and they have the most amazing patina. We salvaged the Jag’s dials and that was built into the dash.

The steering wheel, which has a beautiful walnut finish, was supplied by Marius Raaths and the original dash panels/inlays and cubby were cleaned and fitted. All the wiring was done by my McGyver, all from scratch with no donor wires, he is a genius. He maps the routes of the wires and then he creates a whole wire loom. The seat is being J custom made, from one door to the next and upholstered in my old jeans. The rims that I had dreamt of would give the bank manager sleepless nights so my son has sanded the 17″ ones I currently have and painted them satin black. They look amazing!

I did not want any silencers as there is a certain thunder from that engine that is pure music to my ears. Straight pipes right through to the back, that’s it for me. Now because of all this, there was not a big gap for the fuel tank. There was no way that that fuel tank was coming behind my seat or on the back of the bin; some things you just don’t need to see! So we salvaged again, a Nissan 1400 tank which was perfect size (forces me to stop in every town for some shopping!)

So the countdown begins to Cars In The Park PMB 2013, we will be burning the midnight oil. Oh but how nice would It be to take a trip, put Eric Clapton in my ears and take on our winding roads in my Angel Rust. Five months down the line, the words are few, the experiences …    plenty as I visited Cars In The Park on a roll back. I did not get all the things done but on my first unofficial road trip, (very much undercover from anything with a blue light, red sirens and so forth), I hit the road to Matatiele. No windows (waiting for the rubbers to arrive), mid autumn, winds howling at an unnatural rate (there was enough com husks on my seat to fuel a small bio plant). We slogged on until the unthinkable happened, the engine overheated to an extent of no repair, we drove it home by grace alone and found two cracked sleeves, I was done. Now that is a blow to the bank that I just could not afford and I had already skimped on so many other things. I think the reality of ft all is that you never really know what you are getting yourself into with a build or that the money should be endless and the resources nearby. There the Chevy sat, on the ramp, heads off, waiting for a miracle as finances were non-existent; I could not ask for any more money as there just wasn’t any. I am sure plenty of builders have felt like this, jy is teen die vloer, die balke kraak bo jou but as the clich6 goes “every cloud has a silver lining”.

Time was ticking to go to Scottburgh for the Classic Car Show 2013 and my Superman came to the rescue I am one of the privileged few to be married to a 3-ln-1; Superman, McGyver- van der Merwe (genuine!), and no Job Is too Ыд or small. Our piggy bank came to a crash on the floor, coins spilled everywhere and my eyes shone like dlamondsl So the V8 upgrade project came 4 days before the show, there were so many conversions and wires with the new engine that I Just sat pretty and made coffee, loads and loads of It and overtime on the dock. (Luckily I don’t pay my husband overtime, I do the cooking and deanlng and Ironing and whatever else).

The night before the trip (the first offl-dal road trip where you are allowed to wave at the blue lights, pull over for the red ones) as we pull the Chevy out the workshop, the gear selector cable snaps and tension was at breaking point My 3-ln-1 calmly took off the cable and started brazing It together again while I rushed to the kettle (coffee Is always a good Idea). The next moment the cable caught alight and would not stop flaming and In his haste, my 3-Jn-1 used his fingers to stop the fire crackling any further and burnt his fingerprints off, (so no more overseas holidays for us, passports and all). I stood and stared as this cable flared like a turkey on Christmas lunch and I Just started giggling hysterically. That was It as there Is no way this cable would ever work and no way was this trip going to happen.

But the best bit of all is the people we have met along the way, the friendships forged, the camaraderie, few lifestyles have the privilege to share what we have found. Our eyes are on the horizon, ready to hit the road.