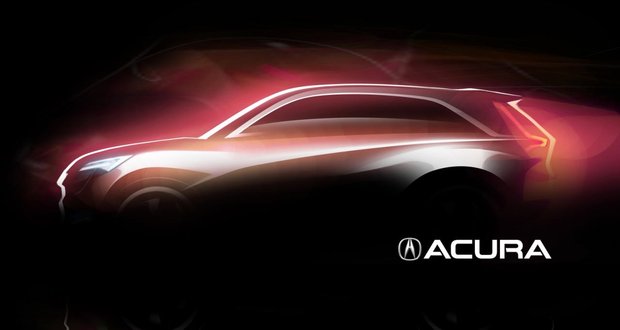 The company Acura has shown the fresh picture of its next crossover. The design of the car is pretty well, although not for everyone! Shanghai Motor Show will become a usual set of pre-production prototype, signed for this month. The car itself will be available for sale in 2014. There are rumors and they are evident, judging by the photo, that new Acura will compete directly with Lexus NX, which is already being tested.

Nowadays, there is no technical information on the future car. It is known for sure that the car will be sold in China. The Japanese took up a good segment of crossovers. Acura recently started selling a new generation of RDX. Soon the market will debut MDX 2014 of model year. The name is kept secret and it will be the smallest in the line of Acura SUV.

According to Acura leading dimensions and wheelbase it is a good competitor to expensive Audi Q3, BMW X1, Mercedes GLA, Lincoln MKC.

We already know that Mercedes is close to release a competitor of Audi Q3 and BMW X1. The car is expected to be called GLA and is already being tested on Europe and the U. S. roads. Sales of Mercedes GLA will start in late 2013. By the way, the Honda Company will also show their new minivan in Shanghai.

2013-04-12
John
Previous: Mini plant in Oxford celebrates 100 years
Next: Top-manager of Mercedes AMG believes that diesel engines are not suitable for “charged” cars