On a cold winters morning, a load of Rods were lining up on Blaauwberg beach for a calendar photo shoot. As miserable as the lack of coffee and constant rain was making me, it all became better when a Chevy Nova pulled up. I just fell in love with it on the spot and I spoke to the owner OJ van Jaarsveld, about his 1962 Chevrolet Nova. OJ found his Chevy the same way most people find their cars now days, on Gumtree from a guy in Johannesburg.

“I have always wanted a Chevrolet Nova; it’s been my dream car for ages. The Chevrolet Nova SS is, in my opinion, the ultimate sleeper car. Hopefully I can “convert” mine to an SS one day. Back in 1962 it was basically a Toyota Corolla that would thrash a Porsche off the line.”

When OJ got the Chevy it was already painted however it still needed some work to be done. I just loved the colours the previous owner chose as the car was originally a red/maroon colour but the white and blue gave it such a classic look. My dad and I had to re-do the interior, carpeting and re-spray the dash but the seats and door panels are still the original ones. My dad and
I tackled the wiring together as well and I installed the original OEM Radio as well as some new badges and side view mirror. All the parts were imported from Classic Industries. The Chevy used to be a 3 speed manual however I had it converted to a 3 speed auto TH350 gearbox along with a B&M Mega Shifter. The motor is still the original 3.2 Straight Six with 54 000 original miles on the clock but OJ is planning on putting a Chevy V8 into it along with an upgraded disc brake system.

OJ is very happy with his Chevy and says “Obviously there are many little things that I want to improve and fix but that’s the case with most Classic cars.” So when I asked OJ if there was any other projects on the future “I am busy putting the finishing touches on my first Care Racer, using a Suzuki GN250 as a starting platform. I am also helping my brother with a full restoration on his 1964 Morris Mini and my dad and i have also recently “completed” work on his 1977 Alfa Spider.”

I personally love this car, the wheels, interior everything just works for me. I hope we see more rides like this soon. 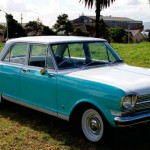