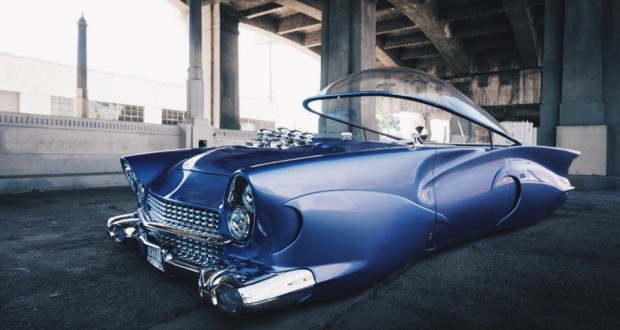 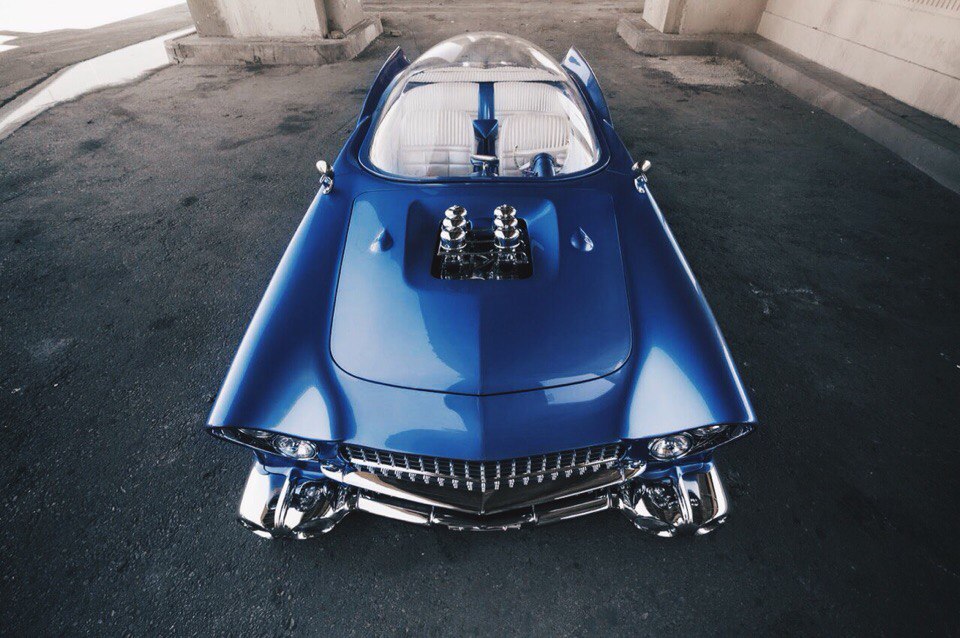 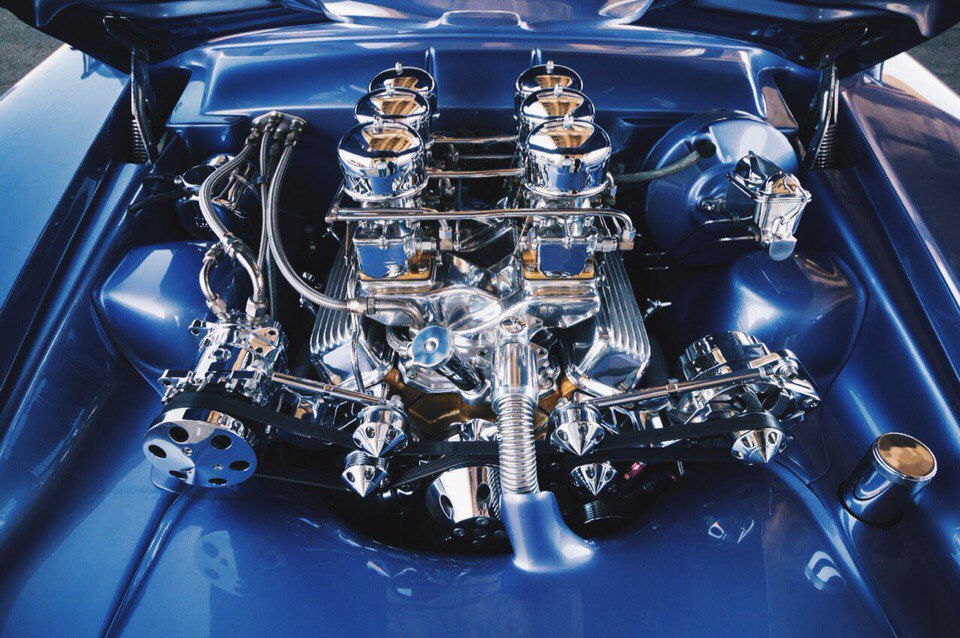 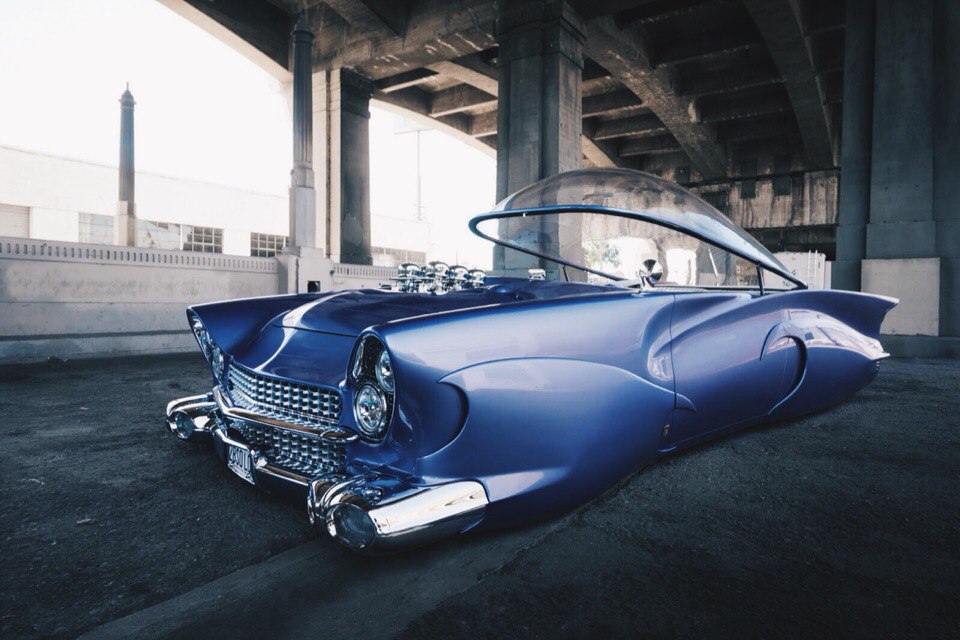 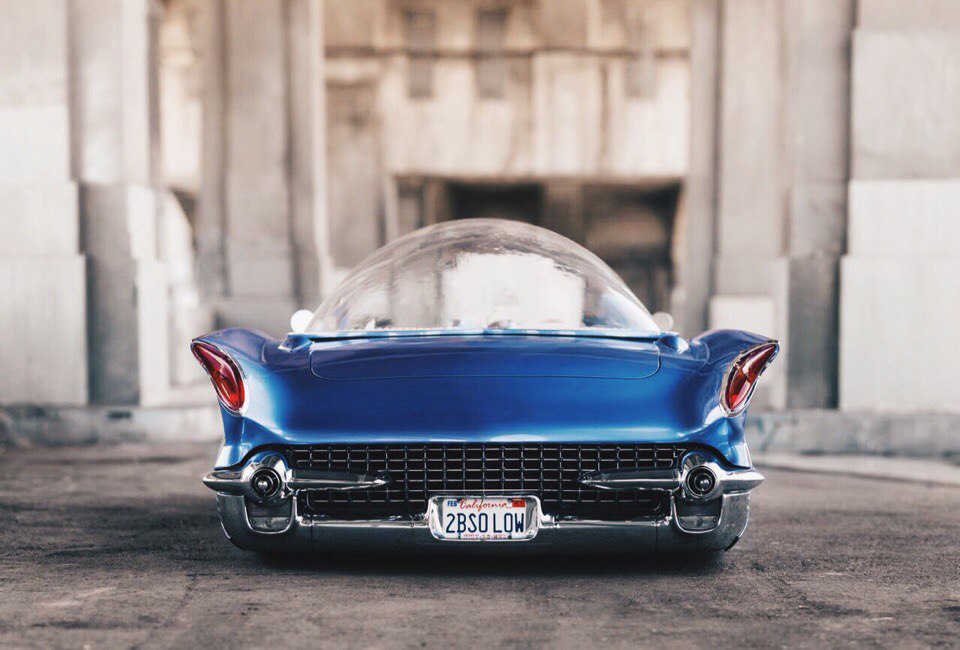 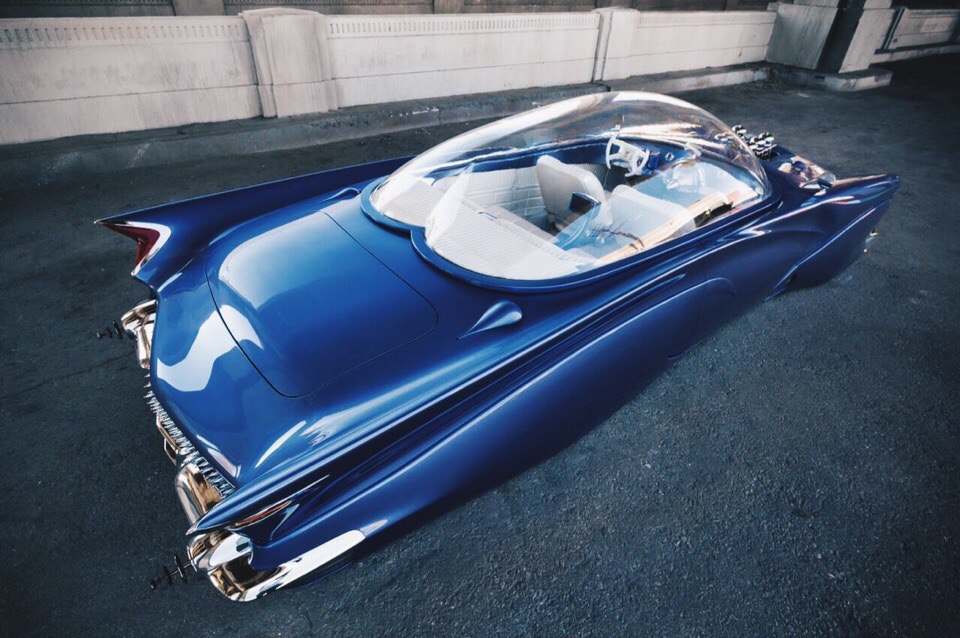 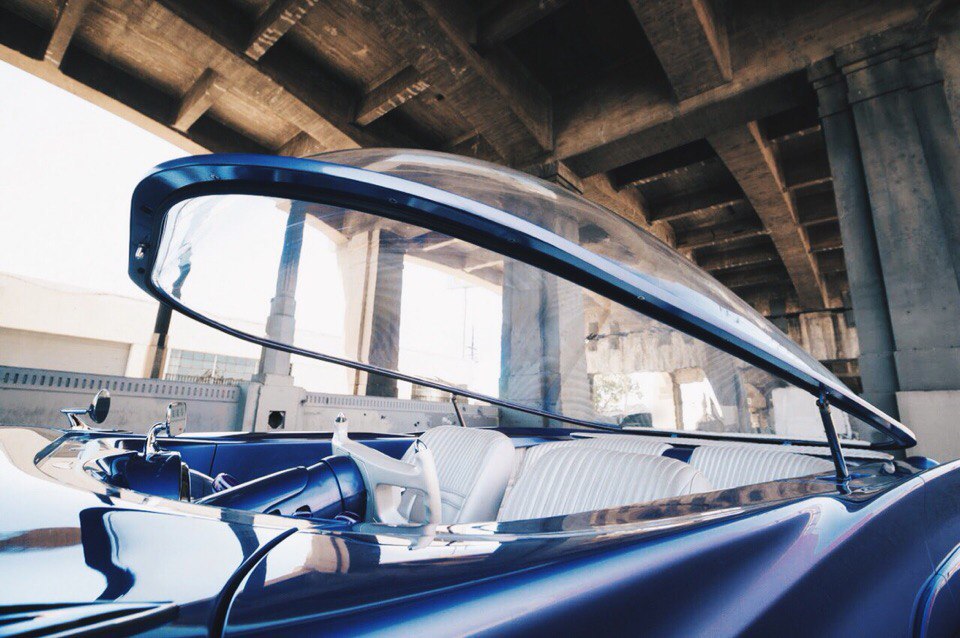 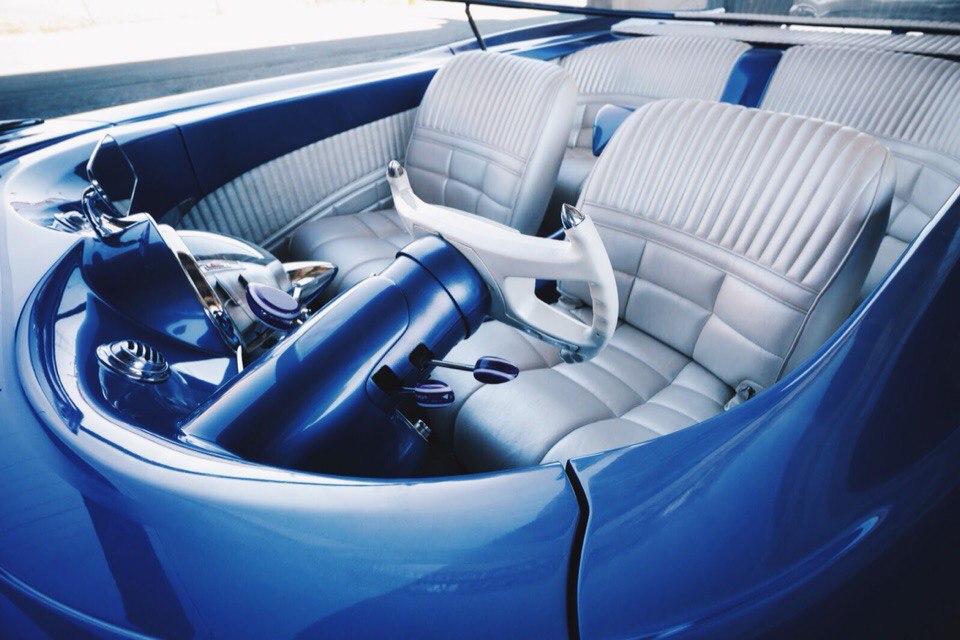 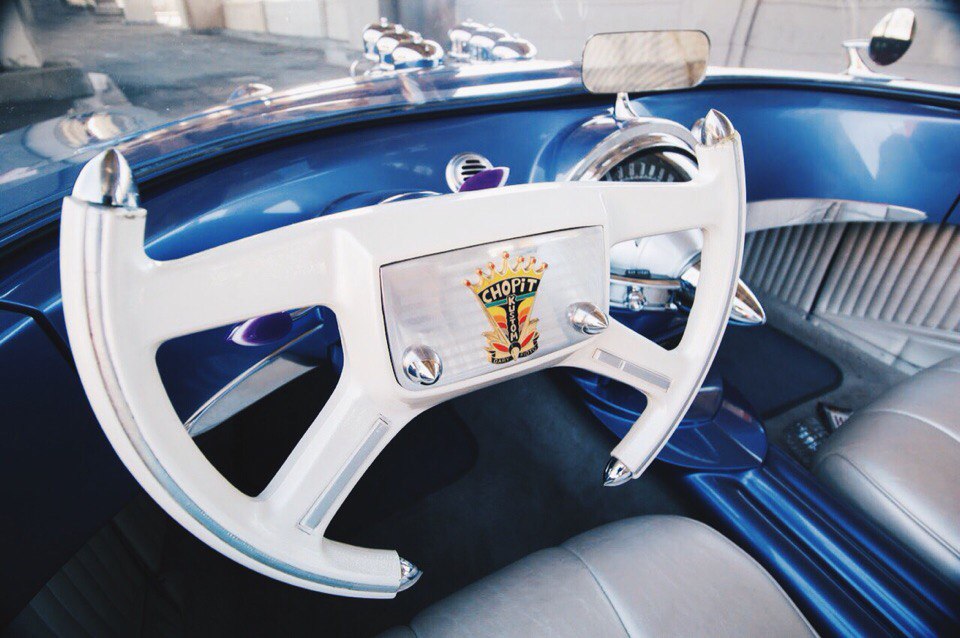 Bubbletops are a fascinating part of the custom-car world. Pioneered by such restyling maestros as Ed “Big Daddy” Roth and Darryl Starbird, Bubbletop cars wonderfully combine fascination of 1950s Americana with jet age fighter aircraft, rocketry, space travel and above all, the promise of the future, both real and imagined.

The builder of this amazing car, Gary “Chopit” Fioto, admits that as a kid growing up on Long Island, New York he was fascinated with bubbletops, particularly those of Darryl Starbird. Fioto’s nickname, “Chopit,” craftily describes his central customizing philosophy. After he impressed custom-car traditionalists with his new interpretation on an old theme, a chopped ’50 Merc transformed into the sleek hardtop called “Tuf Enuff,” Gary Fioto performed his unique take on the Bubbletop genre.

As per his style, he executed it’s design and build like no other: Fioto’s resulting effort, dubbed “Beatnik” after his car club, the famed “Beatniks,” is a lavender 1955 Ford-based custom he’s skillfully reworked into a Bubbletop. However, instead of lowering the roof of his donor ’55 Ford, he raised it, handcrafting the largest-ever Bubbletop custom.

In 2006, “Beatnik” won the coveted $20,000 Grand Prize at Darryl Starbird’s National Rod and Custom Car Show, in Tulsa, Oklahoma. The win was a poetic one for Fioto, who read Starbird’s magazine feature articles as a youngster and chopped his first top at age 11. “Chopit” used aluminum detailing and a great deal of steel in the “Beatnik’s” construction. He’s immensely skilled in every car construction medium; he uses no written plans, and he thinks in three dimensions.

“I don’t always know what I’ll do when I start,” Fioto says, “but I can see the result as I’m working.” He’s an expert at taking seemingly disparate automotive elements and blending them to a state of perfection.

This one-of-a-kind, award-winning effort is simply stunning with its scooped, full teardrop skirts front and rear, pancaked hood, rolled and pleated pearl white Naugahyde interior and razor-like tailfins. The radical interior, complete with its aircraft control yoke-inspired steering wheel and bulbous dash pod, “Beatnik” is a wheeled tribute to the late 1950s and early 1960s – and it’s truly the work of an artist practicing his developed craft in the medium of metal.

Chris Shelton from Street Rodder magazine spoke to Fioto about the elements he feels are essential for a great chopped car. “It’s gotta have attitude. That’s what I look for when I chop a car,” Fioto said. “I look for coolness,” he added, “whatever makes the car look good is what I go for — it’s just got to say something to me; it’s got to look like it’s moving, even when standing still.”

Look closely at “Beatnik” and you can see that movement – that is, if you can stop admiring the myriad details that make this car so interesting. This success hardly evolved overnight. “Beatnik” was an extensive, four-year project. “Chopit” started by completely removing the roof from a ’55 Ford. There’s not much left of the original Ford now. “Beatnik” rides on a modified ’88 Lincoln Town Car chassis. Fioto likes to replace ‘ancient’ running gear with newer components, reasoning that if there’s a mechanical problem, it’s easier to find late-model, rather than vintage, parts.

For “Beatnik,” Fioto used an eclectic mix of Cadillac, Chrysler and Lincoln components, including the canted quad headlights. The front bumper was adapted from a ’59 Cadillac, while the rear bumper was fashioned from the front bumper of a ’58 Cadillac. The finned taillights are 1960 Chrysler. The front and rear fenders, the door skins and the entire rear section of the car are all steel, hand-formed and oxy-acetylene welded.

The engine, with its period-style six-carb induction system jutting through a large hood opening, is a highly detailed Chevrolet 350 cubic inch small-block V-8 with stainless-steel braided hoses and polished components, plus a serpentine belt system, Hedman Hedders and finned Moon valve covers. And yes, there’s air conditioning for those warm, sunny days under the big, tinted Lexan bubble, which was formed to a pattern and mold created by Fioto himself.

The “Beatnik” retains very few elements of the original ’55 Ford; if you look closely, you’ll note the cowl is still there, as are the insides of the doors and their hinges, the hood and its hinges, the trunk lock, and a few of the original trunk elements. The balance of the custom machine is hand-formed and custom-built.

“Beatnik” has received a plethora of top awards wherever it has appeared. It won “Blackie” Gejeian’s 2005 Fresno Autorama Sweepstakes Award and made the “Top 5 Customs” list at Paso Robles in 2005. It was the “Outstanding Custom” at the 2006 Grand National Roadster Show and won the George Barris Kustom d’Elegance Award. All these accolades are in addition to the $20,000 top prize at the Darryl Starbird Show and First Place in the “Fine Nine” competition. “Beatnik” took the “Roth Rageous” trophy and was the First Place winner in the Hand-built Custom category at the Detroit Autorama. Fioto’s “Bubbletop” was also awarded the American Cup, the top award at Carl Casper’s 2006 Custom Car Show in Louisville, Kentucky.

“Beatnik” is a truly exclusive custom and an inspired design statement that stands alone. Admired today, much like its talented builder, this extraordinary car will be even more highly respected in the future. It remains a fitting tribute to a creative era where a few imaginative builders tried to envision the future and succeeded in their own unique way.