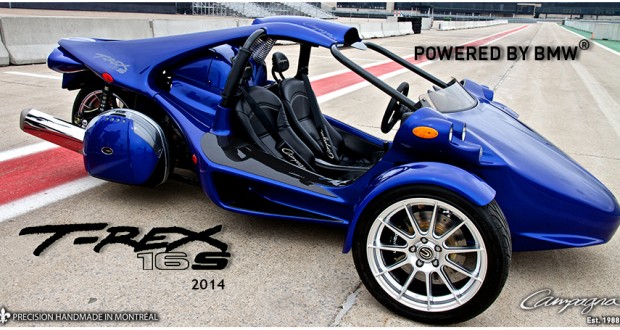 3.92 seconds. That’s all it takes to be swallowed whole by the Campagna T-REX 14RR experience, according to the manufacturer. It’s no coincidence that this hot side-by-side three-wheeler from Campagna Motors will sprint from 0-60mph that quickly. The oddly named T-REX is most definitely not a plodding dinosaur and is touted by Campagna as “the most ferocious pavement predator” on the face of the planet today. The T-REX is at the forefront of the latest wave in the three-wheel concept and is closer to mainstream production availability than most of the competition. As one owner says, “This ain’t your gramma’s grocery-hauler”.

So, what’s all the hoopla about? Three-wheel vehicles themselves aren’t a novel idea, though few enjoyed much in the way of commercial success. Karl Benz developed the Benz Patent Motorwagon way back in 1885. Morgan made three-wheel autos in the UK throughout the first half of the 20th Century, and there have been numerous three-wheel ventures since. Read on for some key features of the T-REX14RR and see whether this is a ride into the future or a roll backwards for spirited earth-friendly transportation.

In Campagna Motors own words, “ From the original concept in 1988 to the first production unit in 1995 we build one of the finest three-wheel side by side vehicles in the world. Our clients come from all corners of the world, those clever enough to choose the most visceral experience in the category. Familiar roads yield unexpected thrills as, eloquent styling and good old-fashioned torque and power play out 4″ above the ground.” The style and ride of the Kawasaki powered T-REX14RR are more comparable to that of a sports car than is Campagna’s other offering, the V13R, described as a “roadster with attitude”, a roadster that rumbles with a 122hp Harley-Davidson Revolution 60 V-Twin engine.

With a tight design and a base price in the $60,000 range it isn’t likely that people will be buying the two-passenger T-REX for carrying milk, eggs and bread any time soon. It’s a good thing because there isn’t any real “cargo” space in the T-REX. Instead, there are two locking and removable side-cases that are just large enough for some foul-weather gear and a few other basic necessities. For now, the T-REX and its competitors are still searching for balance among criteria including performance, practicality and price. But, the ride?

The T-REX is a true “low-rider”, as long as you don’t confuse it with a “slowered” 1960s heavy-metal Detroit beast that’s “cruisin’ the main” at 10mph with “Suavecito” wafting from the windows. Though the T-REX rises only 42” from the ground with a mere 4” ground clearance, there is nothing slow about it. The 2010 14RR is powered by a Kawasaki 1400 cc inline-4 engine which generates 197 HP and plenty of torque. The engine tips the scales at a mere 1,040 lbs and is linked to a sequential six-speed tranny that includes a fully-functional mechanical reverse gear.

Promotional literature states that the general market T-REX is street legal and can be registered as a motorcycle, though without any helmet requirement. For these considerations you will want to consult your local vehicle licensing agency, as rules can vary widely from jurisdiction to jurisdiction. As for the helmet you’d be hard-pressed to find anyone saying you should abandon a headpiece for safety reasons. The same applies whether you are driving the vehicle or if you are in the passenger slot.

Economy, handling, comfort? It’s neither a Prius nor a dump truck. Expected gas mileage is around 28-30mpg, with a single fuel-tank range of about 250 miles. Handling will probably remind the operator more of a motorcycle than a standard four-wheel auto, with its lean-in turning and low center of gravity. As for comfort, well, the T-REX shares more common ground with a sport cycle than it does with a Lexus.
If your three-wheel budget is about a tenth of what the T-REX will set you back you might want to look at the Elio, aimed at consumers for whom price and fuel efficiency (up to 80mpg) are primary concerns. If raw power and speed are your thing you could climb into the Ariel Atom, priced to compete with the T-REX, but heavier, more powerful and a full second faster going from 0-to-60mph.
Finally, it seems almost certain that four-wheel vehicles will remain the industry standard for decades to come. However, the three-wheel side by side concept has proven viability and refinements could enhance the concept to the point where mass marketing may overtake the niche occupied today.

2013-10-10
John
Previous: What is led headlight bulbs
Next: Difference Between Golf and Golf GTI